If you’ve been following any SEO forums or groups, you must’ve already saw the chatter about Google’s June core algorithm update, which included some panic in the form of memes, such as this one: 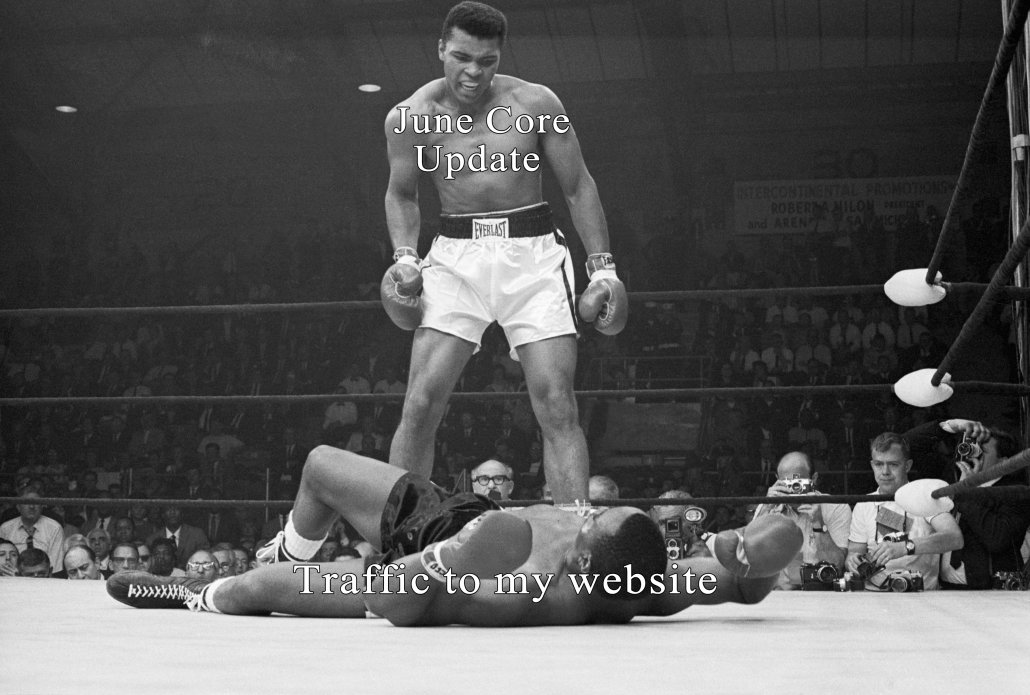 Google pre-announced that they will be rolling out a broad core algorithm update. This update is simply called the June 2019 Core Update and will not be an addition to their ever growing zoo of Penguins and Pandas.

If you read our Google update timeline article, you must know that Google in recent years hasn’t been too forthcoming about their algorithm updates, so this is indeed a rare move of courtesy.

We will first discuss the update itself, and then share some rank tracking insights, that will hopefully help you along your SEO journey with us (or any other SEO tool that offers similar features).

The observed effects in the SEO field

While the impact seems not as widely devastating compared to some past updates, it is still considered fairly big. Many websites reported drops and surges in organic traffic. We scouted the forums and various groups for some anecdotes:

So, hearing about these ranking fluxes following a Google update roll is neat and all (if you weren’t impacted negatively that is). But wouldn’t it be cool if you could observe them yourself, from the comfort of your own seat, even if your rankings weren’t involved in the turmoil?

Well now you can, and it’s pretty damn interesting.

The beauty here is not only can you observe an algorithm flux, but you can also see how rankings behave in general. You can see how volatile they are below the Top10 spot for all search engines and not just Google.

We are talking about our awesome FULL SERPs tool, that can basically track the ENTIRE Top100 roster on any search engine and for any term. Pretty neat, right? What we see here is the Top20 roster on Google.com, US territory, EN as the UI language, for the term “accident and injury lawyer”

And here is how rankings behave in the Google wilderness below the Top10 cluster: The Top30 roster for the search term “toronto chiropractor” on Google.ca

Other than the niche and Google research value, the biggest value of this tool is of course the ability to track virtually, ALL of your relevant competitors in a single graph, for basically every ranking condition that is available.

Track everything correctly on Google

So, here’s the problem with general reports and anecdotes about lost or gained traffic. If they didn’t track their ranks correctly right from the start, their potential to analyze exactly what was impacted and where will not be accurate enough.

Let’s say a website lost some organic desktop traffic following an update. Did they track their specific desktop ranks the right way to see the clearest picture?

Here’s how a desktop rank needs to be tracked for full efficiency:

Basically, you need to make sure that your relevant ranks were not impacted in any strange way.

And we can’t emphasize this enough – the impact might be lower than you initially thought. If you tracked your rank arbitrarily for an irrelevant location and those ranks dropped for that location, that doesn’t mean your relevant location was hit as heavily!

The cases presented at the beginning of the article are also a good example for rank tracking both mobile and desktop ranks. You might get traffic analytics, but with tracking both ranking types you would get a very clear picture behind the traffic gain/loss on all fronts.

We’ve been saying this for a long while now if you’ve been following our blog, but you need to be as accurate as possible when choosing which terms to track.

Furthermore, there are even more subtle drops in ranks that might occur and confuse you unless you track everything correctly. Mobile visibility by OS and device types is one of them.

Following algo updates, your ranks might dip or rise in only one of those fields.

So, for any SEO beginners reading these lines, now is the time to start tracking all the needed ranking types! Here’s our complete guide if you need one:

Another tip we can give following this update is don’t place all of your eggs in the same Google basket.

We saw again and again that no one is safe from a Google update messing with your rankings. This might potentially never change as their algorithm is always changing and evolving.

Don’t forget Bing, Yahoo! and Yandex are also part of the search engine game, each with their own respective demographic types and advantages.

If you lose a big chunk of your organic Google traffic, it’s a good band aid to still have some traffic coming from other search engines. These small safety measures might save you from a devastating ranking blow.

True, the chances of taking a huge ranking impact isn’t incredibly high, but one huge algo update messed with a THIRD of all search results back in 2011. This is like having insurance.

Websites must have traffic sources which go beyond organic, such as a solid paid ads route. If you are in video marketing, don’t forget YouTube. If you are in eCommerce make sure you sell your products on Amazon as well.

Make sure you have Notifications set!

Our final tip for this article is to use our Notification feature and set up triggers to alert you whenever a sudden change takes place. Here are all the triggers that can be set:

We update your ranks at least once a day and an additional time on demand, so you will be up to date if anything strange happens to your ranks.

As usual, pinning down exactly what changed is deducted by trial and error and field observations, as Google will not say much (It’s also entirely possible Google isn’t sure themselves how everything operates exactly, due to neural networks obscurity). We can only scout for anecdotes and Google team responses to draw conclusions.

Regardless of what changes in the Google algo, make sure you spread your SEO efforts to include more than only Google, track everything correctly and set up those crucial notifications.

It’s not uncommon that strange cases without rhyme or reason are often observed following an algo update. We only hope that you were not influenced negatively or at least that you gained traffic!

Also subscribe to our blog and stay up to date with search engine news and rank tracking tips.

We offer all of the features we mentioned above and much more!

We’ve been around since 2012 and have become the most accurate SERP tracker on the market.

We are the only ones that can track your mobile ranks by OS and device types, and as algo updates become more and more subtle and chaotic, this is a crucial feature to have.

PRT is also 100% white label and is designed for users that have their own customers to take care of. Which is why you can place your logo and company details on all of our reports and features, including the SERP tracker itself!

And best of all, you get to try it all out for absolutely FREE and no credit card details, or auto-renewal traps!

Why do we do this? Because this was our policy from the get-go. By having a high quality SEO tool, with no grey fees, contributed to our growth virtually by word-of-mouth and recommendations only. A feature no one in our field has managed to achieve.