Blog - Latest News
You are here: Home1 / Articles2 / Google vs. SEO: Are featured snippets even good for webmasters?

One of the major 2020 Google algo updates had a lot to do with Featured Snippet positions. While featured snippets were frequently discussed in SEO communities since they were introduced, it has become somewhat of a hot topic, since the update. Many covet the featured snippet position, and marketers swear by its potential to build brand power.

Sure, the featured snippets take a nice chunk of SERP real estate and are featured at the top spot (the new 1st position), but do they equal traffic? The answer is – not necessarily.

Ever since featured snippets were introduced in early 2014, many webmasters complained that they saw a drop in traffic for specific keywords after being featured in a snippet.

Why might this happen, let’s consider the following issue about keywords that are formulated as questions. If a person gets an answer to a search query, will they still click the link that provided the answer? Chances are they won’t, and here’s why.

Let’s assume for a moment you have done your hard SEO grind promoting the keyword “how much does a tesla model x cost” for that news website that hired you. Eventually, you reach the featured snippet position, and it looks something like this: 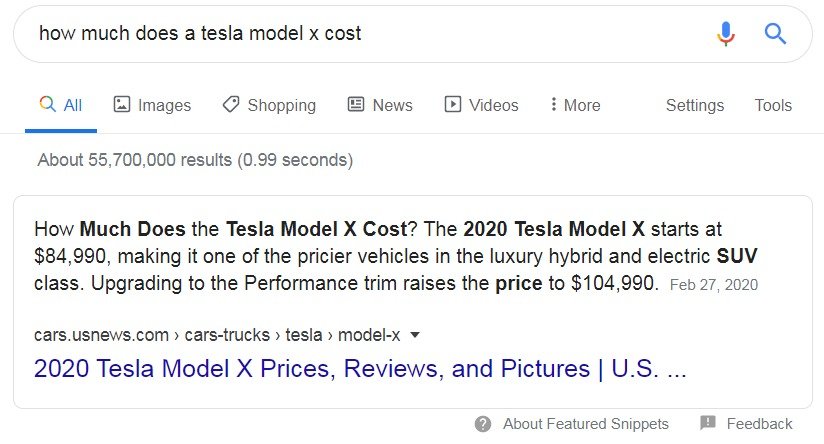 Will this bring any traffic for that website? On the one hand, the users get their answer immediately, but then they will likely not explore further, hence making this featured snippet for this keyword not as effective for CTR. A regular organic search result, on the other hand, could’ve been formulated in such a way that it both provided an answer to the user and also enticed them to click and check out the news website. Thus, moving on one step further in the funnel.

This scenario can be applied to many question-formulated keywords. SEOs need to be extra creative to make sure the featured position also has some CTR value to it.

By effecting the CTR value of the featured position, under the guise of being informative and user-friendly, Google effectively drives more money to their paid ad campaigns. Because if you want CTR, you better pay Google and not SEO experts.

The problem with lazy research and easy answers

And now comes the problem of forming public opinion on various subjects. The reality is most people will likely settle for the answer they see in the featured snippet, even if it’s not a fact but an opinion (and most can’t tell the two apart without giving it a moment of pondering). What this means is public opinion and sentiment can be influenced by simply reaching the featured snippet position on certain hot debate topics. And what if Google decided to actively manipulate the answers their users get for certain topics? Answers that benefit Google and not necessarily the public. For example, keywords such as “are self-driving cars safer than regular cars” can be easily manipulated in Google’s and big tech’s favor, even if it turns out that the answers are more complicated than a simple ‘yes’.

Featured snippets can become ‘fake news’ rather quickly. Even in 2017, the phenomena of featured snippets damaging small businesses and brands was covered by The Outline.

This situation is especially alarming since it connects to the growing usage of voice search, which we recently covered here on our blog. Back in 2016, Google said 20% of all searches are done by voice, and analysts predict that by 2023 this figure is likely to grow to 50%. Now, 75% of all voice searches are in question form. This trend means the voice assistant will read out loud the first featured snippet result, regardless of how ‘correct’ it is for almost HALF of all question search terms!

Let’s have a look at some embarrassing “correct” answers Google provided to specific questions:

Which presidents were in the KKK? What are the dangers of MSG? Why are firetrucks red? Can Google be wrong? Finally, this is best summarized with the search query “how to quit playing Fortnite?“. Currently, this is the answer: Is this the only method to quit playing Fortnite? Is it the best one? Does it come with research to back up its effectiveness? Is it a free method, or does it lead to a paid website? Is this the one with the best SEO expert behind it? We don’t know, but most people will settle for it and won’t search any further. And gaming addiction can be as damaging as any other addiction.

Is Google ‘stealing’ content from websites for their featured snippet

Another grey area for the featured snippet position is copyright infringements. Google is showing content that is effectively written by an independent author not employed by Google. The users see a chunk of that ‘original’ content on Google and don’t even click the author’s website. Does that mean Google is stealing that content? The answer is tricky for several reasons.

For starters, you can’t copyright facts, and if the answer is factual, then there is little the author can do about it. Second, when you get indexed by Google, you agree to their terms of service. These terms are written by the most expensive and powerful lawyers that money can buy. Even the best lawyers have a hard time understanding highly complex Lawyerese.

How many authors will even attempt to tackle a giant like that in a courtroom battle? The average budget isn’t even large enough for the initial retainer lawyer fee, most likely.

And then we have the case of Genius.com and how they caught Google red-handed by cleverly using a pattern of straight and curly apostrophes. SparkToro has made this beautiful PowerPoint presentation, detailing all of the featured snippets follies:

Genius made headlines by challenging their giant thief, and Google quickly adapted and started citing the sources of their featured snippet content after that.

As for how featured snippets can damage the organic traffic of websites and damage branding, let’s examine the case of celebritynetworth.com:

The net worth of celebrities is one of the most popular and fun search terms. By 2012 the website Celebritynetworth (CNW) became the go-to source for anyone searching for a net worth of any famous public figure. CNW has spent years and millions of dollars researching and curating the net worth figures of more than 25,000 celebrities. But then in 2017, Featured Snippets hit, and Google started featuring data from CNW. Data they didn’t pay a single dollar for, and that was factual, therefore, was not liable for a lawsuit.

CNW’s organic traffic plummeted by a whopping 65% as people were fine with just getting the number they were looking for and didn’t need to see the full breakdown showcased on CNW. Worse still, before the Genius.com debacle, Google’s algo didn’t properly cite the source of the featured snippet. Instead, it linked to external websites that were citing CNW as the source, driving traffic earned by CNW to other sites.

This case can be applied to any website that has spent time and money, curating carefully researched data and needs the well-earned organic traffic to survive and make a living.

If this sounds unfair, it’s because it is. Google is too large to care. What matters is if their machines can read the content and source a direct answer, no matter if it’s right or wrong.

Google pushes YMYL content quality and citations, yet with featured snippets also negatively impacts traffic for many websites in the YMYL fields.

How to track featured snippets and voice search

Regardless if you choose the organic SEO route and aim to claim the featured snippet spot or not, you will need to know exactly when you reach that spot, and if you lose it, and for what duration it’s held!

This is where Pro Rank Tracker comes into play with 3 features. After the January snippet update, we quickly adapted our SERP tracker to let you know whenever you obtain a featured snippet position.

You can track your organic progress, including the featured snippet position with FULL accuracy, just like we always provided our users!

Before reading the steps, make sure you are fully familiar with how Google builds its search index and how it shows search results based on various personalization factors HERE.

Any URL+keyword that you add for tracking should at least have these ranking factors included: If you get a featured snippet position for any of your terms, it will look something like this on our main data table:

Finally, the progress of the featured snippet rank can be seen via our daily progress charts. Whenever a search result becomes a snippet or stops being one, you will see a system note on the Daily Breakdown report. Alternatively, you can also generate a Notes Report and see the system note.

If you want a more advanced outlook on the entire top100 search results for any term, you can head to Full SERPs and see all the top competitors battling for that snippet position: The featured snippet is the no.1 position. You can set a trigger in our system that will alert you, whenever a term that you track has reached the no.1 position, or dropped from that position:

And that’s all there is to it.

Internet users, SEOs, and marketers are all Google’s captives. There is no doubt about it. The current reality is, featured snippets are here to stay, and SEOs need to adapt to this playing field.

Are they fair? Are they good for business? Are they even worth the time money and effort, or are you better off investing it all in paid Ads and social networks?

You need to determine that yourself on a keyword by keyword basis. It’s either working towards having a featured position or settling for a lower rank. As we saw, a featured position has a lower CTR value inherently. But being ranked beyond the first page, for example, has virtually no CTR-value. The final math is either you invest your money on an SEO campaign or a Google ad.

You can, of course, always choose to actively NOT get indexed, to spite Google, and instead invest in social network marketing. But don’t forget that if you’re not occupying that top featured snippet position, there are probably thousands of competitors gunning for that spot, and they will not miss you. Plus, you might end up like CNW and have other websites that cite your data being ranked as a featured snippet instead of you.

No matter which path you chose, always remember to track everything correctly with PRT. So you always know if and how much time your URLs are spending in a featured snippet position.

About Pro Rank Tracker: The only clean SEO-centric SERP tracker on the market

Why clean? Because we always prefer investing in developing our tech over ads. As a result, we grew mainly by word of mouth, and by offering the best SERP tracker on the market, we now have over 60k users of all marketing industry fields.

We offer the most advanced SEO-centric SERP tracker on the market:

Because with Pro Rank Tracker, you can!

With every term that you track, you also get access to our Full SERPs advanced competitor tracking (which we showed you earlier). Meaning 100 search results tracked per 1 term from your quota!

And before you even decide, we have a REAL free 7-day trial for you to test, with no credit card details needed to activate.

We only ask that in return, you, please, only open ONE free account. We want to keep our trial free and fair for everyone!