All hail the eCommerce Emperor! 2019 Amazon stats and facts

You might know that Amazon is huge, but you might not have realized just how huge it is.

In this article, we will go over some mind blowing stats and facts about the eCommerce mammoth, and at the end of the article even show you how to track Amazon product ranks, with 100% accuracy.

So, let’s take a look at the company whose CEO can buy a Bill Gates and still have enough change left to get himself a mint condition Elon Musk.

Past – how Amazon began

Amazon had a humble beginning in an era when eCommerce was seen by skeptics of progress, as a shady novelty, that will never replace “real” bookstores.

“How silly” said the skeptics at the fancy skeptic lounge, while holding their Martini glasses, “A person will never buy a book without physically holding it first har har.”

Needless to say, 1 trillion dollars later in estimated value, these skeptics were wrong.

In late 1993, Jeff Bezos, a promising young lad of 33, left a very lucrative position as vice-president at D. E. Shaw & Co, to start his online bookstore project. The reason for such a bold move was the desire to get a piece of the blooming internet boom that was happening.

At first Jeff named his project Cadabra, but after his lawyer heard someone mispronounce it as “cadaver”, the name was changed to Amazon.

There were two reasons for the name Amazon – first it was named in honor of the Amazon river of South America, which we all can agree is a very awesome river, and the biggest in the world. Secondly, before Google hit the scene, people relied on link directories that were like yellow pages, listing websites and businesses in alphabetical order, and not importance.

The first “office” of Amazon was in Jeff’s rented home garage and was started with the help of a $250,00 loan from his parents. Jeff Bezos in his first “office”

The first product sold by Amazon was a book with the very catchy title “Fluid Concepts and Creative Analogies: Computer Models of the Fundamental Mechanisms of Thought”, by Douglas Hofstadter.

At first they really did only sell books. In 1993, Jeff Bezos probably didn’t even dream one day, that they would be selling basically every shippable item type in existence, including this 90k dollar bling chandelier: 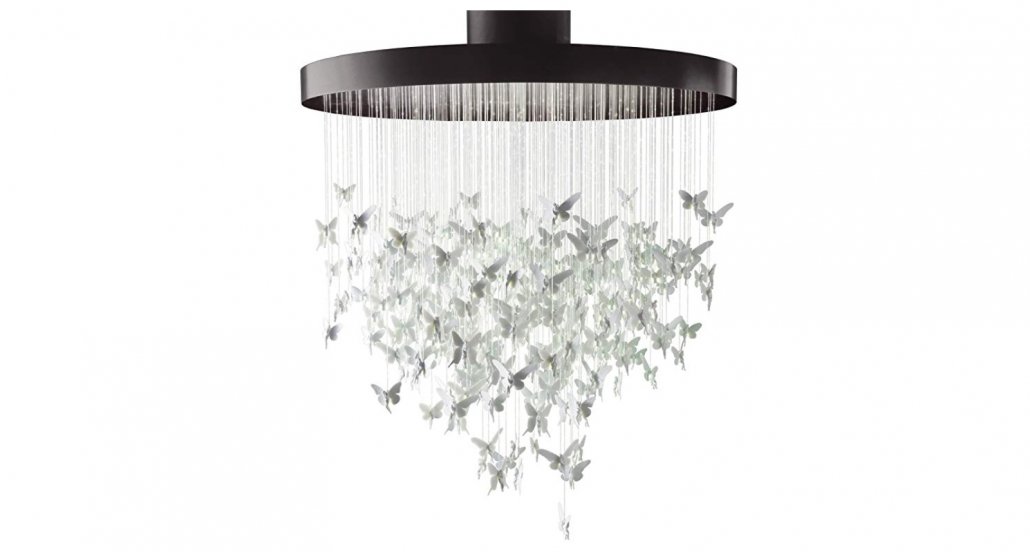 Existing giants at the time, such as Barnes and Noble and Wal-Mart, quickly took to the offensive and attempted to destroy the upcoming eCommerce meteor with petty lawsuits, but to no avail (all cases settled out of court). The old wrinkled men in power will always attempt to hold progress from happening. But luckily the waves of progress are far stronger than they are.

Other than that, Amazon faced many other challenges, the biggest one being the economy Thanos, snapping websites away during the Dot-Com crash. When the Dot-Com bubble burst, many eCommerce businesses died off and were effectively erased. But Amazon withstood the tides and prevailed, to become what we know today.

Fast forward 25 years and Amazon rules eCommerce. According to Alexa (the ranking site, not the Amazon assistant), Amazon is the 10th most visited website on the internet.

People are more likely to search Amazon for a product as their default choice than any other source. And even if they choose to search Google first, if the product is available on Amazon, it will most likely rank high on Google’s SERP, leading people to Amazon anyway.

Even back in 2016, 9 out of 10 people would price check on Amazon before making a purchase.

As for the young lad Bezos, he moved from that basement and repaid the loan his parents gave him and then some. Bezos is currently worth in excess of 161 billion dollars. This makes him the richest (declared) person on the planet, surpassing the runner up Bill Gates by almost 50%, making him richer than Slovakia and Iceland. And his little basement dwelling company now employs more than 647,000 people across the globe.

Anyone can set up an Amazon seller profile, and Amazon currently has over 5million sellers worldwide, across 12 marketplaces: USA, China, India, Japan, Mexico, Brazil, UK, Germany, France, Spain, Italy and Canada, with Australia and Singapore launching soon. And 80% of them sell their products on other channels as well, be it their own websites or eBay. 3% of them made more than 10 million dollars from Amazon alone.

Amazon itself has branched out to much more than book selling since then and currently sells more than 353 million products. They also have more than 90 million US based Prime subscribers, that is nearly a third of the entire US population!

To emphasize what we wrote about in our review article, over 90% of Amazon users won’t purchase a product with less than 3 stars.

The net revenue of Amazon according to Statista in 2018 was 232.89 billion. That means if they were a country they would be the 48th richest country in the world by GDP, surpassing Greece and New Zealand. And their market cap has passed 1 Trillion dollars in 2018, far surpassing that titan that once tried to devour them in their infancy – Wal-Mart. If you were to compare to countries by total wealth, 1 trillion means that they would be ranked 29th, beyond Israel and Finland.

Let’s glance into the future and speculate. Amazon’s future is more important than you might think. Important not in the sense of what will sellers do, but in a sense of holding humanity’s future in their hands.

This might seem like a sci-fi exaggeration, but Amazon is currently participating in the greatest race humanity has ever faced – the race of achieving Super AI. (This is a very long read, but it might be the most important one you will have, for general knowledge about our species as a whole).

The current stage of the tech giants race in preparation of building a better A.I. is gathering as much user data as they can. The biggest competitors are currently Amazon, Google, Facebook, Apple, Microsoft, and China. An A.I. that will understand human psychology, will give them unprecedented power, and will allow them to manipulate us like never imagined.

It’s very reasonable to assume that Amazon will eventually bring Alexa to a level of General A.I. and give it an actual physical body, Ex-Machina style, instead of the little box we know today.

As for delivery speeds, with the usage of drones, it’s very likely the delivery standards will become minutes, and 1-day delivery will be ridiculed as primitive by the next generation. Automation will also make most of these 647,000 jobs we mentioned obsolete, making solutions like Universal Basic Income a viable option.

All we can add here, just in case Alexa releases the Hypno Drones, is let’s hope they will be kind and helpful and not follow any horror scenarios.

Amazon has its own unique search engine, indexing and ranking algorithm called A9. The web is  abundant with  SEO tips, on how to get products to rank higher in their SERP. Unlike Google however, A9 doesn’t rely on external sources, such as backlinks to determine ranks, and most of the SEO game is internal. Indirectly however, if your product sells well because of traffic from other sources, it will naturally positively effect Amazon rankings as well.

Regardless of your strategy, you need to know how these products rank for their respective search terms and their associated keyword search volume. For that you have our rank tracker!

You can simply add your Amazon product ASIN (example:amazon.com/dp/B00TL4DL3A), and the relevant search term you want to track into our tool like so:

You will be able to see how the product ranks for those keywords, as well as the estimated monthly search volume of those terms:

You can track all of Amazon’s local marketplaces and not just their main .com one.

Now another great benefit of tracking your Amazon products, using our SERP tracker, is that you can track them in tandem with their Google rank (and other associated search engines). This is also vital, because as we mentioned earlier, Amazon might be the number one go-to source for product related searches, but Google is a close second.

If you want to catch up on a more in-depth guide on Amazon rank tracking, you can check it out here:

Conclusion – you need to join the Amazon game

If you are one of few that don’t market your products on Amazon, as well as other channels, you might be missing out on maximizing your potential.

If you play the eCommerce game correctly and carve your path in your niche, you can make a very nice living. No matter what eCommerce niche you operate in, you will need to optimize everything correctly, and just as importantly – track your Amazon and other search engine ranks the right way as we’ve shown you above!

We will end this article with this helpful Amazon tip: Amazon is unfortunately still plagued with fake and bot reviews. You can filter fake reviews using these two awesome and free tools:

More on the scourge of fake reviews:

The most complete SEO tool on the market for eCommerce pros

We focused on Amazon stats and ranks on this one, but we at Pro Rank Tracker, specialize in rank tracking all the major search engines with 100% accuracy!

Most importantly we offer Deep Google tracking, which can filter your rankings according to Google’s 2019 standards:

Note that we are the only ones that currently offer DEEP Google tracking.

Other than that, you will also be able to track – Bing (local ranks included), Yahoo! (with local ranks), Yandex (with all local versions), and YouTube!

There are more than 13 types of ranking report features you can send to your clients and colleagues.

Plus, all our features are 100% white label and are designed for you to feature YOUR logo instead of PRT.

Try tracking Amazon accurately and for FREE for 7 days

No credit card required to activate!

That’s right, our policy is to be fair and transparent, so we don’t believe in grey fees!

Our 7-day free trial, with all premium features unlocked, is truly free, and will not auto-renew unless YOU decide to renew!